Back in August it became apparent that Debbie’s 8-year old Fi’zi:k Vitesse saddle on our Calfee tandem was wearing out.  Well, to be more specific, the perforated pleather saddle cover was suffering from delamination and, as it turns out, gel material leaching through the worn-out coating on the saddle cover that was designed to function as a barrier.

I considered taking a shot at recovering the saddle with some new leather as a fix, but didn’t want to get halfway into the project and find that the saddle was not salvageable.  So, I went off in search of a new saddle which is far more challenging than it used to be since brick and mortar, local bike shops (LBS) are now far and few between and don’t stock a lot different saddles: internet commerce has pretty much killed robust inventories at the LBS.

Thankfully, and based on the success I had with the Bontrager Montrose Comp saddle I found for the Calfee when my also very-old Selle Italia ProLink saddle failed at last year’s Southern Tandem Rally in Venice, Florida, they had a couple different Bontrager saddles that looked similar in size and shape to Debbie’s Vitesse.  However, all of them would be far more firm than the worn-out gel saddles, so this was not going to be a seamless saddle change… as few ever are.

To make a long-story short, the first Bontrager saddle she tried which was a women’s specific design was the Yatra Comp (at left) which did not work well and was returned under Bontrager / Trek saddles 30-day fit guarantee. 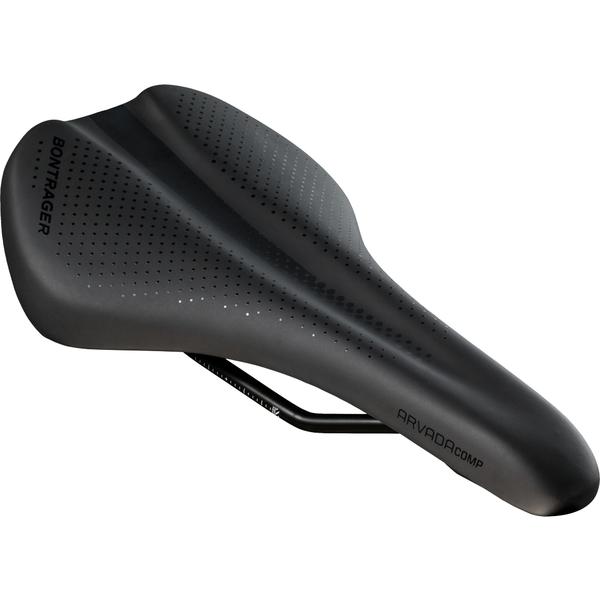 However, the Arvada Comp (at right) while definitely less forgiving than her Fi’zi:k Vitesse provided her good support and sufficient comfort without causing any chafing.  She’s since gotten very comfortable with it and we also replaced a 7-year old Fi’zi:k Vitesse that was on the triplet as it was also starting to show signs of cover delamination.  Again, she had no issues with the saddle during our 130-miles of riding at this year’s Southern Tandem Rally.

Getting back to the subject of this blog entry, after making sure the Bontrager Arvada Comp worked-well, I began my experiment to see if I could successfully re-cover Debbie’s old saddle with new leather to give it a second life.  The project was made a bit more challenging since the Vitesse has two gel inserts incorporated into the saddle’s construction.  However, since there was nothing to lose, I pressed ahead: 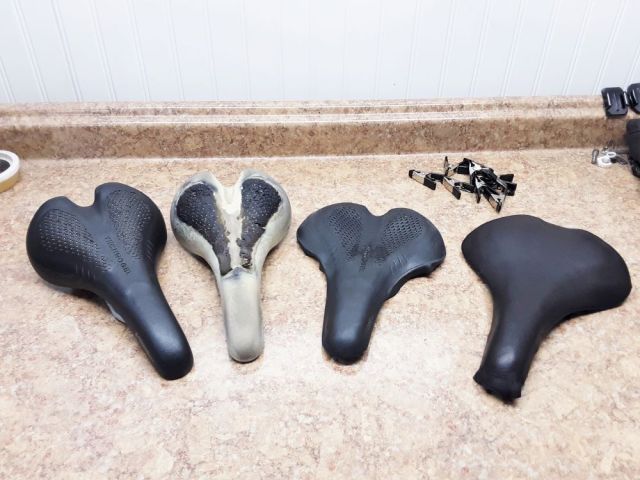 At left is the Vitesse off the triplet, next to it is the one being recovered with the cover removed and gel inserts exposed. Next to that is the old worn-out cover and at right is the new piece of 4oz leather after being trimmed, soaked and allowed to conform to the saddle.

And, here’s the final product, with the recovered saddle at left and an original at the right.

It was a very good learning experience.  Obviously, the less complex the saddle is the easier it would be to recover.  Some of our Selle Italia “TransAm” saddles with their anatomic cutouts and other features tend to be made from up to 7 pieces of leather that are stitched together, so I’m not sure if that would be something I’d want to tackle vs. a good-old Flite Saddle.

I’ll probably re-cover Debbie’s other Vitesse saddle just in case she decides she’d prefer the gel saddle she’s been riding for the past 8 years vs. the Bontrager Arvada Comp at some point as I’m sure the second one’s gel inserts are in better shape and, well, I’ve learned a few things on this first saddle that should allow me to step-up-my-game on the second one.

I've been around a bit and done a few things, have a couple kids and a few grandkids. I tend to be curmudgeonly, matter-of-fact and not predisposed to self-serving chit-chat. Thankfully, my wife's as nice as can be otherwise we'd have no friends. My interests are somewhat eclectic, but whose aren't?
View all posts by TG →
This entry was posted in Technology & Equip.. Bookmark the permalink.

This site uses Akismet to reduce spam. Learn how your comment data is processed.

"Cultivators of the earth are the most valuable citizens. They are the most vigorous, the most independent, the most virtuous, and they are tied to their country and wedded to its liberty and interests by the most lasting bonds."

Dirt road cycling adventures across the Americas and beyond